I meant to write this post for Global Recycling Day, but, as is often the way, I was too busy.

The images I’m sharing with this post are by ScapaJoe. For Global Recycling Day, we shared their piece ‘Inside My Head’ on SHSO – a creative blog I run along with my mates Joe Haze and Mr Mascall. ScapaJoe are artist Caroline and photographer/3D designer Dean who collaborate on 3D artwork and photography using reclaimed waste to highlight environmental issues. You can find out more via their Instagram, Facebook and Website. 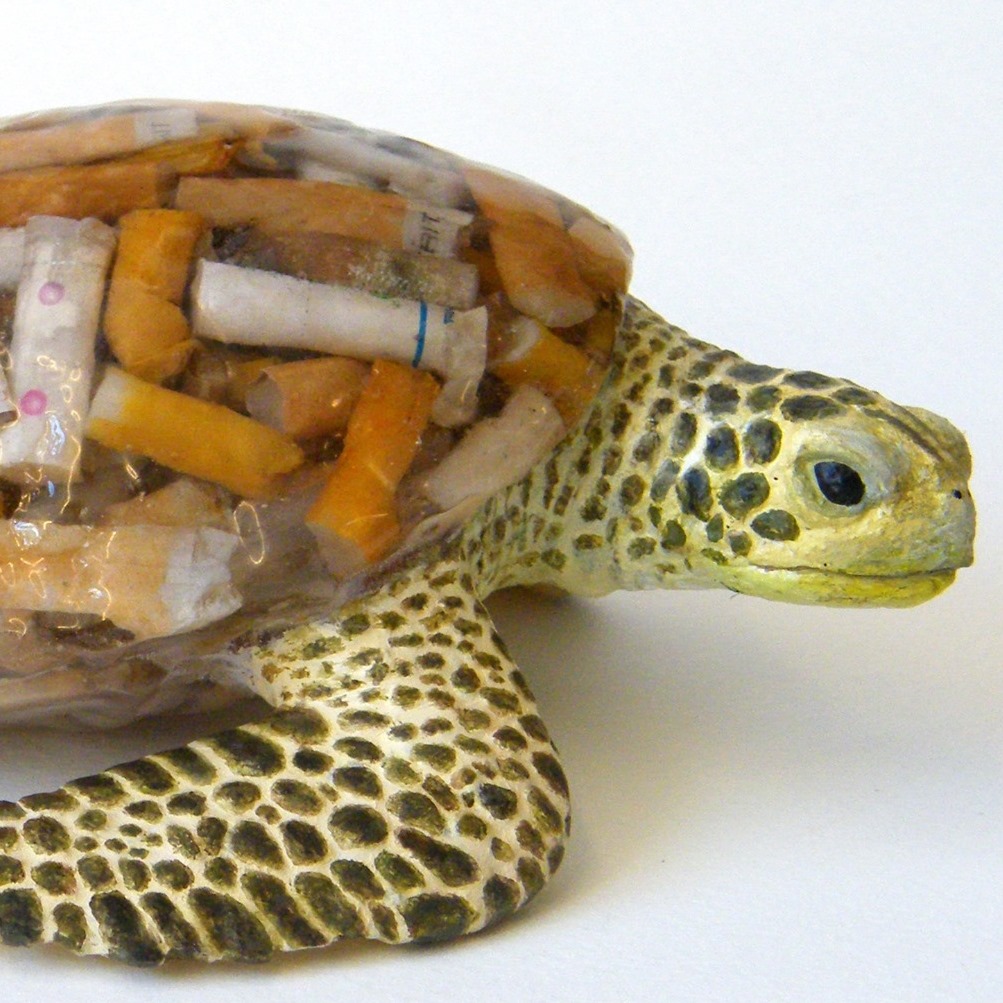 Meanwhile, back to the last plastic carrier bag…

So here it is – a slightly funny, slightly infuriating story…

I was speaking to a friend a while ago and he told me, very proudly, that he had managed to get the last plastic carrier bag at Morrison’s.

He was triumphant about this.

“They’ve replaced them with all these shit paper ones” he explained. “They look like they’ll break.”

“But you drive to Morrison’s, don’t you?” I asked “You only have to walk to your car. And anyway, I’m sure they’ll have thought of that. They probably won’t give you bags that will break.”

“Well I got the last plastic one anyway” he said proudly. “It was just there, I don’t even know if it was meant to be. I nearly missed it.”

I was laughing my head off.

The thing is, this friend is a highly intelligent and reasonably well educated person. Also, a couple of years ago he began what another friend referred to as his “George Harrisson stage” – i.e. he suddenly became a massive hippie and started getting interested in all this spiritual stuff. Which is fine. But you’d think that, along with all that, he’d think about the environment, sustainability etc. Apparently not.

‘I used to like you better before’ I told him, and I will say that I think it’s testament to his good character and lack of ego that he took what I said in good humour.

This friend had also – and this really was irritating, although again very funny – delivered me a well meaning lecture on how I should respect psychedelics. It was all said in a kindly, knowledge-imparting, older brotherish sort of way, and not meant in any way as a put down, and I listened to what he was saying, and thought about it all, but then suddenly something struck me…

“The thing is” I said, “That’s all very well you saying all that, but I gave YOU your first trip! And it was only just over a year ago!”

I’m not putting my mate down here. He’s one of my favourite people, and I haven’t seen him for ages because of the lockdown, and I really miss him. The point I’m trying to make is that you would assume that he would think about the environment. Firstly, he is intelligent and educated, and secondly that he is a person who thinks about ‘spiritual’ stuff and being connected to the Earth and all that. But it turns out that I was mistaken in thinking that someone who is concerned about my lack of respect for psychedelics would also be concerned about plastic pollution. And he is not the only one.

I think about waste, pollution and climate change a lot. And thankfully, so do many of my peers. But the scary thing is that many do not. I moved in with someone who championed many (worthy) causes and was shocked to find that they did not have a separate recycling and general waste bin. And I had a housemate ask me if the green bin was the recycling one. Which genuinely shocked me. Although I suppose at least they were asking the question,

But this is all scary on various levels. These are not stupid people – but for some reason they just have not thought about this stuff. Which leads me to wonder what really important things I have never thought about that may be causing me to act in a way that is severely detrimental to something. And secondly, and more importantly, it is scary because the consequences of their actions, or lack of action, will be dire.

So I just think that whenever and however you can, you should not only try and do your bit, but you should also make people aware that they should do their bit, and aware of why. And I guess you should try to do it without being preachy, which I probably fail at. But hopefully some people take it in and know that it’s meant well.

Images – Flukes of Nature and Fag End Turtle by ScapaJoe